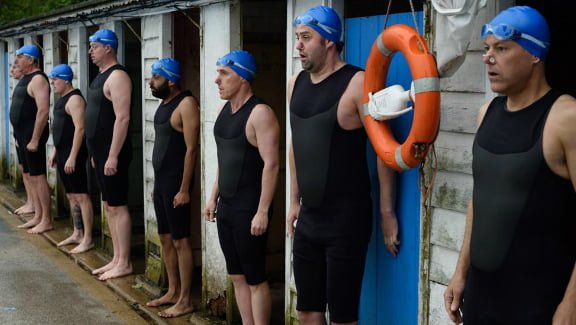 It’s dubbed The Full Monty in Speedos and its London shoot took place in parts of Lambeth, Lewisham, Southwark and Croydon. Swimming With Men opens in early June in Germany with a UK release expected shortly afterwards.

Hoping to win back his wife, middle-aged accountant Eric joins a men’s synchronised swimming team. Alongside Rob Brydon and Jane Horrocks, its stars include Rupert Graves, Daniel May, Jim Carter and Adeel Akhtar.

The shorter UK trailer is here and you’ll catch a glimpse of many London locations in this longer trailer.

FilmFixer manages the film office service for the above local councils. FilmFixer CEO Karen Everett says, “The filming with our boroughs took place in May and June last year (2017).

“One of the more surreal scenes in the movie was shot outside Wigwam, a toy shop on Rosendale Road in Lambeth’s SE21, where Rob Brydon, as Eric, sees a toy monkey in the shop window, waving at him, at first, and then engaged in a rather more indiscreet act.

“It triggers him to call his wife Heather, played by Jane Horrocks, and later, quite disturbed by the monkey, he hands a homeless couple the wine he’s just bought.

“In Lewisham, along Canonbie Road, Jane Horrocks as Heather is driving, with son Billy in the backseat, played by Spike White. She takes a call on the speaker phone. Unfortunately, it’s Eric in front of the monkey, wanting to discuss their sex life. She frantically tries to disconnect the phone.

“A private property in Lewisham on Longton Avenue plays the family home, where 50 and cast filmed over four days in June last year.

“During filming, the neighbours will have seen Rob Brydon acting drunk outside the home, watching his wife through the window. The location manager had to work closely with residents to make sure this filming went ahead with minimal disruption.

“Sail House on Ringmore Rise in Lewisham’s Forest Hill hosted a day’s filming with a couple of scenes shot outside on the street. Rob Brydon races home, along the pavement on Ringmore Rise up to the junction of Liphook Crescent.

“And in another scene Brydon’s onscreen son Spike White chats to him, suggesting he sees a therapist, and asking if he’s getting a divorce.

“About 50 pupils at The Charter School, an academy in Southwark’s Herne Hill, were invited to play themselves in the film, as extras in school scenes. Spike White as Rob Brydon and Jane Horrocks’ son Billy is trapped by his parents coming in to collect him from school.

“Still in Southwark, the swimmers get together in the pub at Peckham’s Ivy House where the beautifully preserved 1930s fittings are quite apparent. It’s a much-loved local, owned co-operatively by the community. It was the first pub in the UK to be listed as an asset of community value, bought under “community right to bid” legislation.

“The community has fundraised to preserve its interior including a stage that’s hosted legends including Joe Strummer, Ian Dury, Dr Feelgood and Jeff Beck. It’s a really special location that looks fantastic in the film.

“The character Kurt, played by Adeel Akhtar, works out of The Dental Practice in Southwark’s Dulwich Village, where in the film we see him performing a tooth extraction.

“Croydon’s own council offices at Bernhard Wetherill House play the accountancy firm where Rob Brydon works, with offices on the sixth floor, the lift lobby and atrium space used. Other office space was used as green rooms and make up rooms for the actors It’s fantastic to have put this slick glass building on Croydon’s Mint Street to work as a City office.

“In the film Rob Brydon moves into the Best Western Plus Aparthotel in Croydon where, among other scenes, we see him looking out of his bedroom window at someone putting bottles in a bin.

“Set to be the next British feelgood export, it’s a charming film whose production behaved charmingly among residents, operating sensitively and making donations to local groups and charities.”