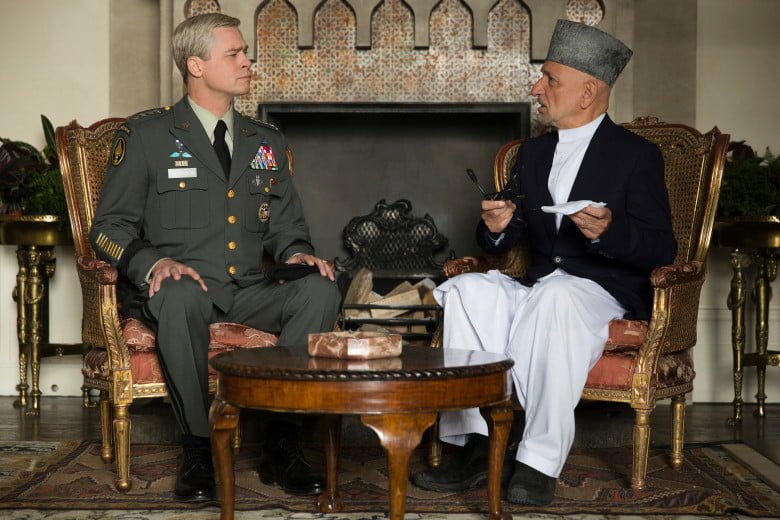 Brad Pitt stars in the absurdist War Machine, opening on May 26th in UK cinemas and on Netflix. In autumn 2015, The Enterprise Pub in Camden hosted 200 of the film’s cast and crew as it doubled for an Irish bar in Paris.

In the Rolling Stone article, the Paris pub in question is the real-life Kitty O’Shea’s, a touristy Irish bar, chosen for being the least “Gucci” place the general’s staff could find. The occasion was McChrystal’s 33rd wedding anniversary celebrated not only with his wife Annie, but also his entire inner circle.

According to the Rolling Stone feature, McChrystal’s real-life staff in 2010, then the most powerful force shaping US policy in Afghanistan, called themselves Team America, in reference to that satirical movie, which, among other things, lampoons the White House.

For the movie, Brad Pitt and his co-stars, along with 200 other cast and crew, headed to The Enterprise Pub on Red Lion Street. They filmed the scene there in October 2015. You’ll see snippets from this filming in the trailer.

FilmFixer manages the film office service for Camden Council. FilmFixer director Andrew Pavord said, “Brad Pitt and his production could film the interior of a Paris pub anywhere in the world. We’re delighted that The Enterprise in London was chosen.

“This was a big shoot with a significant number of cast and crew to manage in inner London. But it was shot very quickly, in just a day, and a donation was made to a local charity, chosen by Red Lion Square residents. This sort of considerate behaviour helps ensure the next Hollywood-style shoot will be welcomed next time.”

Addington Palace also features in the trailer, where Pitt tells Kingsley that Nato is about to embark on a new direction to build Afghanistan into a free and prosperous nation. Kingsley replies, “Sounds a lot like the old direction.”

According to the Rolling Stone expose, Nato forces were unpopular, having killed 90 civilians in the first four months of 2010, leading McChrystal to concede, “We’ve shot an amazing number of people.”

His insistence on avoiding such deaths was unpopular with troops whose complaints included, “We aren’t putting fear into the Taliban.”